Cloud Management from an Enterprise Perspective

It stands to reason: The larger the organization, the more complicated the task of managing its diverse cloud operations. It’s a sure bet that whatever cloud strategy your company began with bears little resemblance to the cloud infrastructure currently in place. And that goes double for the cloud setup you’ll be using months and years from now.

That’s why one characteristic dominates all others when implementing any cloud program: Openness. Whatever services and processes you’re using today have to be designed to accommodate tomorrow’s innovations – whatever form they may take. The only way to achieve this goal is to rely heavily if not exclusively on cloud services that connect seamlessly to the outside world.

While it’s unlikely enterprises will be able to make their hybrid cloud configurations less complex anytime soon, there are ways for companies to make the networks easier to manage and use. In a September 15, 2016, post on Light Reading’s Heavy Reading blog, Sandra O’Boyle explains that what’s needed is “open cloud management platforms” that offer “an IT cloud control dashboard.” The two most important roles of such a platform, according to O’Boyle, are to ensure reliability and to reduce latency.

One trait more than any other characterizes enterprise cloud transitions that have gone awry: haste. That’s the conclusion of a recent Gartner survey that found a wide gap between enterprise IT executives’ expectations about how quickly they will realize the benefits of cloud technology, and the actual time required to plan and implement a comprehensive hybrid cloud strategy. ComputerWeekly’s Carolyn Donnelly reports on the survey in a September 15, 2016, article. 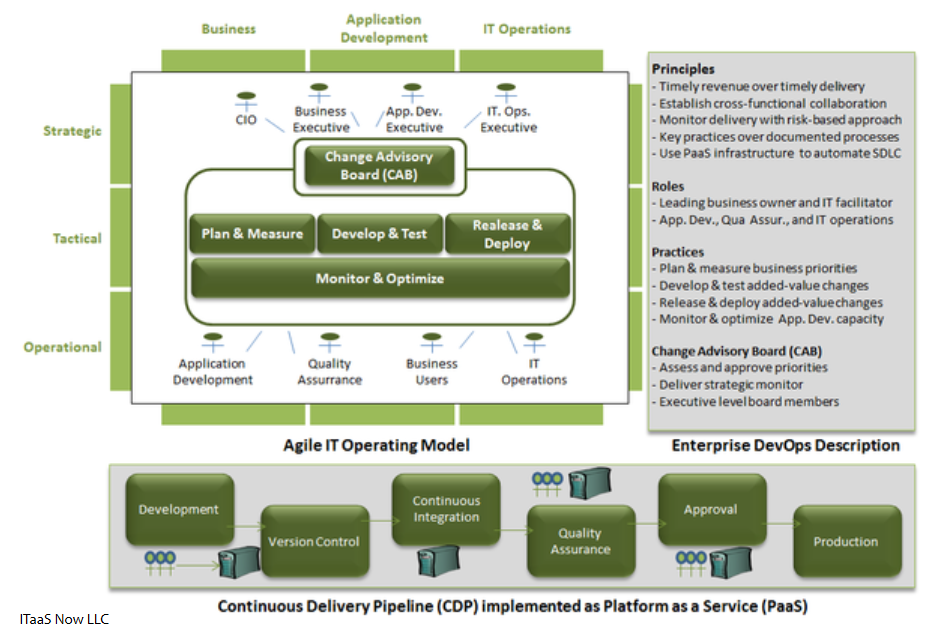 In a typical enterprise DevOps blueprint, the overarching goal is market responsiveness rather than timely delivery. Source: ITaaS Now LLC, via CIO

The dichotomy in the Gartner study is that enterprises realize an average 14 percent savings in IT spending by migrating to cloud services, yet “a large number of organizations still have no current plans to use cloud services,” according to Gartner research director Sid Nag. The primary reason enterprises shun cloud technology is their concern about security and privacy, which Gartner perceives as a failure of communication rather than of any inherent attributes of the cloud. The security vulnerability is not in the cloud services themselves, Gartner concludes, but rather in the way the services are being used.

For example, the Morpheus cloud application management platform ensures that an enterprise’s cloud resources are both safe and accessible, whether they reside on public or private clouds. The intuitive Morpheus dashboard puts in a single window all the controls you need to provision a diverse range of databases, apps, and app stack components on any server – on premises, or in private, public, or hybrid clouds – in just seconds. In addition, each new database or app stack component is backed up automatically and recoverable with only a few clicks.

Making the business case for the cloud is the easy part

Conventional wisdom identifies the principal benefits of adopting cloud services as flexibility and disaster recovery, but according to the results of the fifth annual State of the Cloud survey (sponsored by RightScale), enterprises choose cloud services primarily to reduce their IT budgets. Markets Media’s Rob Daly examines the study results in an October 6, 2016, article.

The savings result from the shift of computing costs from a capital expense that in traditional IT is fixed and immutable, to an operational expense that does away with most of the upfront costs that companies were previously forced to depreciate over the long term. That’s the conclusion of BNY Mellon managing director of network architecture Neal Secher, who participated in a panel at a recent IT conference in New York City.

Survey: Use of DevOps leads to faster production, higher-quality software

Any doubts enterprises have about the benefits of adopting DevOps teams to break out of IT silos are dispelled by the results of a June 2016 survey by Puppet that quantified the advantages of the DevOps approach. IT departments with a “robust” DevOps process in place realized a 200 percent increase in software development speed over “low-performing” IT operations. They also report recovery times that are 24 times faster, while they spend 50 percent less time addressing security concerns, and 22 percent less time doing unplanned work or rework. TechRepublic’s Alison DeNisco reports on the survey in an October 6, 2016, article.

Among the characteristics of a successful DevOps program is integration of all IT operations; a continuous feedback loop connecting development, design, production, and product management; building in transparency to allow business managers to participate; baking security into the product’s DNA; and keeping third-party links in mind from day one. 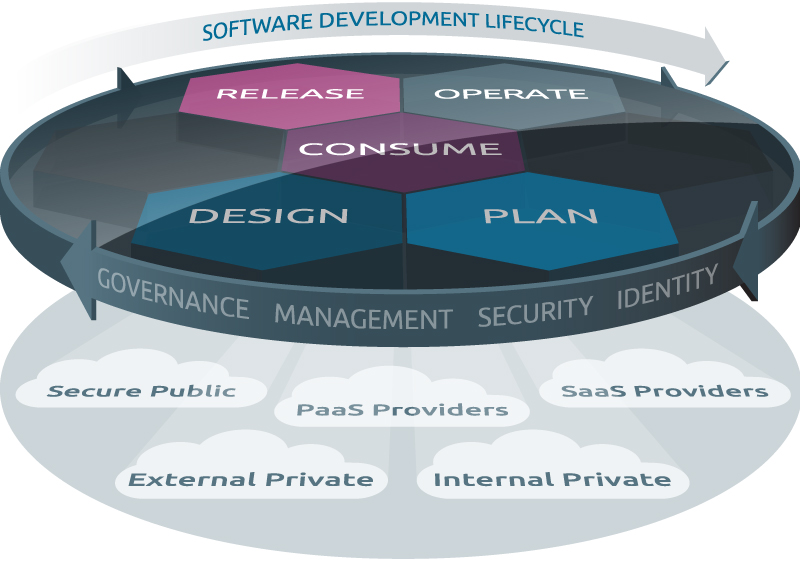 In place of the top-down flowchart of traditional IT processes, DevOps entails continuous processes best represented by circles. Source: CSC

One conclusion of a survey of DevOps teams by Intel in September 2016 is that enterprises may underestimate the time and effort required by team members to monitor their cloud environments. The result is that other important tasks may be neglected, according to Intel executive Jeff Klaus. A comprehensive cloud management service such as Morpheus allows DevOps to spend less time monitoring by showing at a glance the status of all your cloud-based databases and applications.

The tentative nature of enterprise cloud programs to date is highlighted by John Webster’s “survey of surveys” on the state of corporate cloud strategies in a May 3, 2016, article on Forbes. On average, large enterprises have implemented six different public or private clouds due to concerns about in-house expertise, security, interoperability, and the fear of having their critical data locked into a single service.

An unfortunate result of IT’s hesitancy in adopting cloud services is the rise of shadow IT as business managers take to the cloud on their own, with little or no input from or consultation with the IT department. Slowly, IT managers are working with their counterparts in lines of business to develop and implement guidelines on cloud usage that IT is able to enforce.

Enterprise IT’s conservative approach to cloud services was justifiable when there were more questions about the technology than answers, but today, any company that isn’t primed to realize the benefits of the cloud in terms of speed, efficiency, and cost savings is at risk of being left in the dust.