What do the Olympics and Zambonis have to do with Cloud and DevOps?

It might be a stretch but stick with me.  First, as a winter sports nut and father of two daughters, it’s been fun to watch the women bring home the medals – including a fantastic win by the women’s hockey team.  Being the Cloud and DevOps obsessed guy that I am, however, I couldn’t watch the games without also thinking about enterprise IT.  I know… I need to get a life.  The analogy that came to me was the linkage between an overused Olympic skating rink and the often fragmented, chipped, and torn up landscape of enterprise IT systems.

Every platform choice, control plane entry, automation project, failed deployment, manual handoff, script, API, and cloud option adds up to a massively brittle infrastructure laden with technical debt and cruft… leaving something completely at odds with high-velocity deployment.  The need to focus on the software delivery pipeline rather than on specific tools and scripts for each step in deployment was echoed recently by Neil Weinberg in a January 18, 2018 article in InformationWeek.  After all, some of those tools, clouds, and API’s won’t be around in the future, and new options are always around the corner.   There must be a way to transcend tool limitations that force round pegs into square holes.

Winning digital gold can start with the right mental attitude

Delivering enterprise agility and DevOps at scale means focusing as much on ‘mindsets’ as on ‘toolsets’.  The development workflow encompasses build, test, deploy, monitor, and improve — all done continuously. Your pipeline has to be flexible enough to allow new tools, platforms, and application components to be swapped in easily and just as continuously. This means architecting pipelines as software deployment factories that are as standardized and agnostic as possible.  Equally as important is that the team of developers and operations staff who make continuous delivery/continuous integration possible have adopted the DevOps mindset rather than simply choosing a tool and assuming the rest will follow.

Weinberg predicts that 2018 will be the year stability arrives in the DevOps area. As more enterprises adopt container-centric and serverless architectures, customers will have clearer end-to-end choices, reducing the pressure to devise their own mix-and-match toolchain.  A common trap that companies fall into when implementing DevOps is trying to choose the individual tools they’ll use before they’ve determined how they will orchestrate the pipeline. The failure is that your process is then defined by the nature of the tools rather than the nature of your business’s unique needs.

I was at the DevOps Enterprise Summit (#DOES2018) event last year and heard an SVP from a large bank describe how they had successfully moved to daily releases by becoming deployment-centric.  All of the other steps in the chain were tied to individual tools but for him, using deploy as the center of the universe and anchoring the east-west toolchain and north-south infrastructure provided the right level of abstraction.

Just like the US Women’s Hockey team, DevOps is a team sport

Once you’ve got the mental commitment, you’ve got to rally the organization.  In this case, the Ops team needs to provide the right self-service deployment foundation for developers to push code to.  SD Times’ Lisa Morgan writes in a January 3, 2018, article that one reason only 29 percent of companies surveyed by Forrester Research have implemented end-to-end deployment automation is that operations haven’t yet offered them “a consistent pipeline that developers can just push their code to without worrying about operational requirements.” The goal of the fully automated software pipeline is to let the Dev side of DevOps push code and see it in production environments immediately. 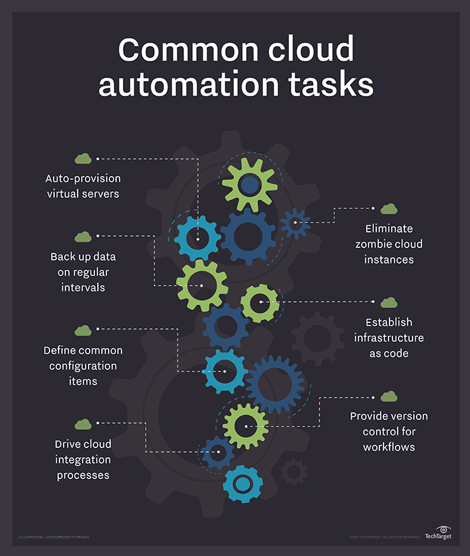 The benefit of pipeline automation for the Ops side is that they can focus on managing the pipeline rather than always working to fix things when they break. The increased complexity that will result from large-scale software-defined infrastructure projects presents a challenge for the operations side in particular. Tomorrow’s intelligent, automated, self-organized systems will integrate policy, inference, and orchestration in what Milne calls a “cognitive infrastructure.” The goals are to accelerate workload mobility at scale, reduce both capital expenses and operational expenses, optimize performance, and enhance management and control — all without requiring specialized skills.

BeyondTrust is a Morpheus customer who is a great example of teaming.  Created out of a private equity combination of multiple software companies, the ops team needed a way to enable different autonomous development orgs to consistently provision without forcing them to conform to a single toolchain.  With Morpheus they were able to standardize deployment and provide a common self-service interface that was 100% tool and infrastructure agnostic.

The twin themes of automation and self-service are echoed by Stuart Burns in TechTarget’s December 2017 guide to IT orchestration. Business users are able to follow the workflows that make a service or compute item available to them, while automated tasks can be repeated “flawlessly,” on demand or on a set schedule. 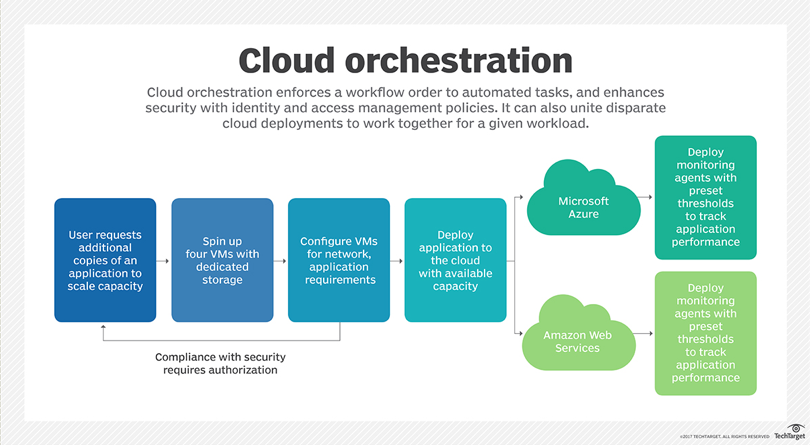 A typical orchestration scenario entails a user request for duplicate apps to scale capacity: instances are spun up and configured to suit the app and network, and the app is deployed to an on-prem or off-prem infrastructure cloud, where it is monitored, logged, and protected. Source: TechTarget

By hiding the technical components of instance provisioning from users, they are able to request that a VM or entire multi-component application stack be provisioned via a self-service console.   Burns lists the components of an IT orchestration environment including

The last two categories are “where the magic happens,” according to Burns. By automating business workflows, a VM can be created via a simple scripted build, for example, that populates the user account during the creation process. Users come to view the self-service portal as a “cloud shopping basket” they use to buy VMs and services, configure them to the users’ needs, and then get them approved or built directly, depending on the workflow.

Now, I’ve never spoken with Mr. Burns but I feel like he’s my new BFF as he has very articulately echoed the exact point of view that I’ve been building out at Morpheus over the last few months. By empowering business users, appealing to developers’ needs for autonomy, and improving the efficiency and performance of cloud workloads, orchestration becomes the glue that keeps the disparate components unified.

Just like the Zamboni smooths out the rough surface of the rink, unified multi-cloud orchestration enables both sides of the DevOps equation to become more closely integrated with the workflows of the business units they serve without giving up what made them special as individuals. What had been two separate and distinct workgroups begin to function as one, with singular practices, processes, and goals.

The large enterprise companies that have successfully deployed Morpheus for CI/CD and DevOps are using us as a standard deployment and delivery interface for workflows in order to insulate themselves from the need to constantly care and feed scripts spread across fragmented tools and clouds.  Many of these customers have tried a variety of methods to transform over the last couple of years – PaaS, CaaS, IaaS, Config Management, ITSM, etc.  Inevitably, those projects failed to fully deliver because they still required handoffs and left the surface of the infrastructure inconsistent.

With the Morpheus Zamboni, you too can achieve frictionless operations and provisioning time measured in minutes. To learn more I’d encourage you to setup time for a demo with one of our solution architects and see if your organization can go for gold.