According to reports, the use of cloud infrastructure is growing and will continue an upward trend of growth moving forward. A roundup from Forbes cites a number of sources that show the recent growth as well as the predicted growth for the coming years, and the forecast is excellent for cloud infrastructure.

The Forbes roundup found a report that showed revenue up 69% over the previous year for AWS. In addition, they also cited a report showing that the cloud computing market grew to $110 billion in revenues for 2015, an increase of 28%. This report also noted that aaS/PaaS services grew at a rate of 51% and that private and hybrid cloud infrastructure services grew at a rate of 45% during that same period.

As noted by the reports, there was definitely substantial growth in the cloud market recently. With more and more companies finding that the cloud can make such things a scaling (a big bonus with autoscaling), load balancing, alerts, reports, and a number of other important tasks quicker and easier to accomplish, industry experts are predicting that major growth for cloud infrastructure will continue to be the trend for the coming years.

In 2016, spending on public cloud Infrastructure as a Service hardware and software is forecast to reach $38B, growing to $173B in 2026.

With a forecast like this, there is no better time to be in the industry and to make use of the services provided by companies offering cloud infrastructure, as the competition in the growing market will likely fuel even more innovation and additional bonuses for new and existing customers.

Worldwide IT cloud service revenue is projected to increase to $127 billion by 2018, with managed services being projected to reach $256 billion in the same year.

Microsoft cloud products are projected to reach 30% of revenue by 2018, up from 11%. This included the Office 365, Azure, and CRM cloud products.

Public cloud revenue is projected to increase to $167 billion in 2020 (up from $80 billion in 2015). Interestingly, the report cited also noted that 49% of the market believes the public cloud is just as secure, or even more secure, than the private cloud. This shows a great deal of confidence in cloud service providers, which is likely another reason for a large amount of projected growth.

When it comes to public cloud services, worldwide spending is predicted to grow to $141 billion in 2019 (up from close to $70 billion in 2015). Again, this indicates a substantial confidence in the service providers by those that will be projected to use the services.

In an article about data center consolidation due to the cloud, Data Center Knowledge’s Yevgeniy Sverdlik cites some interesting examples of companies that are transitioning from larger data centers to smaller ones, using cloud services to accomplish the task. Among the companies mentioned, Capital One and GE were notable in how they planned to employ the use of cloud infrastructure in addition to what they currently had at the time.

We have to be great at building software and data products if we’re going to win at where banking is going.

Capital One has plans to lower the number of data centers it uses from eight down to five, and then to lower it all the way down to three in 2018. The idea is to be able to deploy new software much faster and to be able to quickly expand products that are in high demand.

Notably, based on recent trends, they have responded to the fact that mobile is the preferred method of access for the majority of their customers. To make their newest mobile banking application, they made use of AWS to handle the load.

GE’s ongoing data center consolidation program is expected to take the company from 34 data centers to four, which will hold only the most secret and valuable data it has.

GE had an interesting task to accomplish: communicating with devices that aren’t typical, such as aircraft engines, manufacturing plant machines, wind turbines, and more. The biggest part of the workload in going from 34 data centers down to four will be transferred to AWS.

If you are looking to begin cloud adoption, why not try out Morpheus, which makes provisioning, scaling, and maintenance of your apps and servers a breeze. You can provision databases and servers quickly, and have your app up and running in no time! If you are looking to add load balancing to the mix to help improve the speed of your web site or app, then Morpheus offers an incredible service for this, allowing you to provision additional servers quickly so that scaling up is quick and easy.

Using the available tools, you can also monitor the various parts of your system to keep track of uptime, response time, and to be alerted if an issue does arise. Morpheus has an excellent alerting system that helps to minimize false alarms in order to help you stay more productive in your day to day activities.

In addition, Morpheus has a clear, concise, easy-to-use interface that makes accomplishing your tasks a breeze. 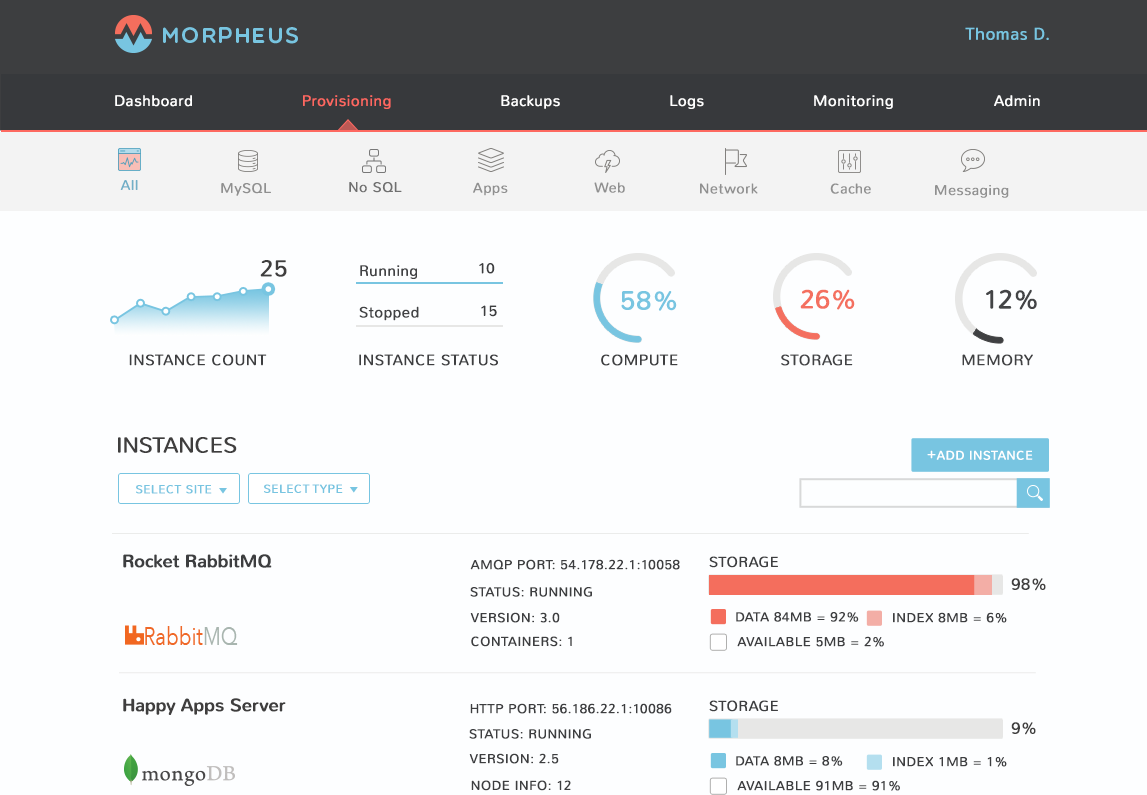 The Morpheus interface is clean and easy to use. Source: Morpheus.

With Morpheus, you can provision apps in a single click, and the service provides ease of use for developers with APIs and a CLI. In addition, backups are also automatic, and you can have redundancy as needed to avoid potentially long waits for disaster recovery to take place. So, with all of these advantages, why not register an account today and take advantage of all that the cloud has to offer?

Using Morpheus to establish control and policy enforcement in hybrid IT. Bring order to the chaos!